To help during these difficult times, Camellia Grove is delivering cases of Kombucha to your home in the greater Portland area! Click here to get more info about our home delivery service.

Q&A With Our Co-Founders

Have you ever wondered who’s behind the crafting and making of Camellia Grove Kombucha? Well, we sat down with our co-founders, Joe Mayol and Robert Deering, to ask them a few questions to get to know them a little bit better:

What made you want to make Kombucha?

Joe: I had been drinking it and casually making it at home for a couple of years, and my parents bought me this book called “The Art of Fermentation.” I was experimenting with pickling and fermenting at home, and through the book, learned that between 2008 and 2009, Kombucha sales quadrupled. I became fascinated with the idea of putting my own spin on Kombucha in this rapidly growing market.

Robert: I tasted a funky Kombucha in 1994 and thought it had great potential despite the taste because it was a non-alcoholic fermentation.

What flavor of Kombucha is your favorite?

Joe: I love the complexity of our Oolong Tea Kombucha.
Robert: I’m currently loving the Green.

Do you prefer tea or coffee?

Joe: I love a cup of coffee in the morning, but after that, I have to switch to tea.
Robert: Tea! I don’t drink coffee anymore because it gives me heartburn…

Where did you grow up?

Joe: Modesto, California
Robert: I was born and raised in Portland.

Where did you go to college?

Joe: The University of Oregon for my BFA in sculpture, and then to Oregon Culinary Institute for culinary school.
Robert: I graduated with a BA in Biology from UC Santa Cruz, and I have an MS degree from the University of Washington. I also have an MS in Teaching from Pacific University.

What is your favorite book?

Joe: I have several favorites… I really like “The Confederacy of Dunces” for a good laugh, and also, Anthony Bourdain’s Kitchen Confidential.
Robert: One of the only books I’ve ever read twice is Zen and the Art of Motorcycle Maintenance.

What is your favorite movie?

Joe: This may be a tie between Caddyshack and any of the early Star Wars movies.
Robert: Lawrence of Arabia.

What is your favorite sports team?

Do you have any pets?

Joe: Yes, my girlfriend and I have two cats, Piggy and Zooey.
Robert: Yes, we have a Maine Coon named Malcolm. 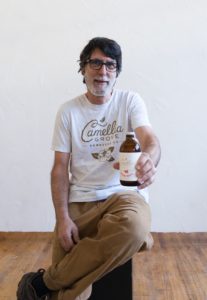 Where do you like to sip on your Kombucha?

Joe: All day while we’re working in the brewery.
Robert: My front porch.

What is your favorite thing to do in Portland?

Joe: Trying new restaurants and bars.
Robert: I like to ride bikes through Portland’s wonderful neighborhoods.

Who is your biggest inspiration?

Joe: I’m lucky to be surrounded by family and friends that inspire me to better myself on a daily basis… also, huge fan of Anthony Bourdain!
Robert: I’m a big fan of Linus Pauling.

If you had to pick an actor to play you in a movie, who would you choose?

Joe: I was dreading this one! I guess Joseph Gordon-Levitt?
Robert: Robert Redford or Harrison Ford, whoever is available.

We had so much fun sitting down with our co-founders, and we hope you enjoyed learning a bit more about them!